* Spoiling the show for you beyond this message, by yours truly*

Soulmates is another dramabeans recommendation that I tried out but didn’t have as much love for it as JB did.

What is it about?!

Soulmates, as you can infer from the title, is a drama about love or finding love. The initial episodes were great for me simply because my interest lied more in the comical-yet-true aspects of dating life – how each gender view love and dating, and the things people do (to get the upper hand). I actually thought things would carry on being this fun and quirky but then the second half took the drama-mama route. So, I practically watched the second half for the sake of knowing the ending and of listening to the OST. Ha.

The main focus of the show then? Do people date for love or companionship or do they, for the sake of an experience or marriage? Worse, do they take dating as a game?

[Who are in the show? (with reference to the green-ish picture above)]

So to answer the questions, I guess I have to go through the characters in this show because they do provide us with people who think of such questions. In Soulmates, we have Su Kyeong [6 o’clock position] as the ‘normal’ girl who has been dating her boyfriend, Phillip[10/11 o’clock position], for 5 years and is about to get married to him. One should note that her acceptance to his proposal was perhaps partly due to public pressure and that the many years together could have ignited a new-found passion in Phillip, for another girl… Jerk. LINK TO THE SHOW WITH ENG SUBS

Shin Dong Wook [7/8 o’clock position] is a playboy whose job is a freelance music co-ordinator. He then seems to be able to hear Su Kyeong’s thoughts…(=.= scriptwriter nim, you do know that you should have established a better set-up so that incorporating such a step feels much more natural right? =…=)

Yu Jin [4/5 o’clock position, Sa Kang] is a demure naïve rich young lady with hopes to get married. This leads to an arranged blind date with Dong Wook whom she slowly falls for. This mentality of hers coincides perfectly with the Korean society, which places importance of having a family. Her friend-cum-roomie, Min Ae[12 o’clock position], is the female counterpart of Dong Wook. She’s practically on the prowl every time, regardless of whether a certain man is attached…

Ryohei[1/2 o’clock position] is Min Ae’s long-term catch. He isn’t that much interested in being a playboy like friend, Dong Wook. There are people like him in this world but sad to say, this is why he’s character is sort of a bore. A sweet bore. Haha.

A mutual friend of Dong Wook and Ryohei, Jeong Hwan[the guy above], is the wanna-be casanova. He’s so cheesy that it’s more amusing than romantic. Mi Jin[the woman above] is Su Kyeong and Yu Jin’s colleague. She is desperate for a man and fixes that desire on Jeong Hwan, who fits her ridiculous criteria. Two other minor[below] characters are Min Ae’s bitch friend, Joo Hee, who falls for Ryohei and Su Kyeong’s dramatic actor brother, Ju Ho[below], who falls for Yu Jin. 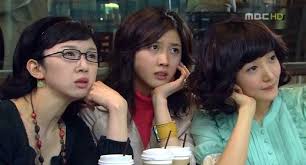 So in short,  su kyeong, mi jin and yu jin are colleagues. [I think their conversations are the best! The things they do after their chitchats..LOL] Ryohei, Dong Wook and Jeong Hwan are friends and work out together. Phillip is su kyeong’s fiancée, Jeong Hwan is Mi Jin’s crush(?), Dong Wook is Yu Jin’s blind date. Min Ae’s together with Ryohei but finds Phillip attractive at the same time.

As mentioned, I was a fan of the show before some areas of the plot/story made it hard to endure. Despite the change in direction, I liked how they played around with fate and timing interchangeably throughout the whole show. If you are meant to meet the person, then, well, you will meet him/her. However, meeting someone you have an affinity with, also depends on the timing, which will then affect the nature of the meeting. Will the meeting be hostile or is it going to be pleasant?

This is where the editing comes in, and it was done very well – how everything, that could stand on its own, fit eventually. To illustrate, the two scenes I would be using are the break-up scene between Su Kyeong and Phillip and the part where Dong Wook waits for a cab nearby. The connection? The cab. Su Kyeong takes the cab some metres away, hurt and embarrassed from the break-up, and Dong Wook flags for it and gets ignored. This skilful editing brought a nice, natural flow of events tying the whole show up nicely.

Besides liking the overall quality of the show, there were characters like Yu Jin, Mi Jin and Joo Hee, that made the show quite unique. The actress did a good job bringing to life Yu Jin’s quirky kind of personality, that may be partly due to her odd-but-endearing old korean speech. This can be seen in the video below and may have seen before at Dramabeans. I decided to use this video because it also shows you how both girls differ in terms of experience in the dating world.

As for Mi Jin, she stands out as a motivation for single women her age. She’s a hilarious character for liking someone like Jeong Hwan but she spares no lack of determination and courage to get herself a man. Most women are too shy to do the chasing. But, considering her age, I doubt she cares any more about her ‘face’. I applaud the actress for her efforts. It must have taken many embarrassing NGs. HA! Mi Jin, you totally rock.

Mi Jin’s man, Jeong Hwan( where’s the actor now?!), is a typical (not all, but most) men. He likes hot women, (and Mi Jin is clearly not) and chases them with doomed-to-fail cheesy pick-up lines. Then as he meets Mi Jin, he falls for her. I seriously don’t know what’s funnier – Mi Jin doing all kinds of things to get Jeong Hwan, or Jeong Hwan falling for her because of what Mi Jin does? LOL. Clearly if you have watched Soulmates, you would wonder why Mi Jin even likes someone like Jeong Hwan. And then when she gives you the reason – It’s because of his vulgar, talkative(i forgot the 3rd one) nature – you begin to think if she’s a little weird. Maybe even mad. LMAO. It was so ridiculous that it felt more like a joke than a reason. Ha, and when you thought her antics were over, she lets out that she’s an 8 year older noona. I didn’t mind the age gap. The age difference actually makes them a good match, considering both their personalities.

Joo Hee’s a bitchy bimbo who, like Su Kyeong’s brother, gets introduced in the later part of the series. As you get to know her, you actually sympathise with her. She may be nasty on the outside, but it’s understandable that she yearns for a nice man, who loves her back. I actually pity her. Everyone gets tired of the dating game after a while and Joo Hee, is probably one of them. * But hello! Nice men are everywhere! *

The other characters, Ryohei and Dong Wook are serviceable, though awkward and over-acting at times. Of the main cast, I didn’t like Su Kyeong here. Her character here was too bland for me. Despite that, you could feel her pain when she had to agree to the breakup suggested by Phillip. But I guess, that meant Phillip’s acting was good? Haha. On the bright side, you could say that that was the best he could do for Su Kyeong and that the fact he bravely suggested it to her in her face was also what a real man should do.

Su Kyeong’s short-lived friendship with Yu Jin and Mi Jin was a joy to watch. However that went awry with Dong Wook suddenly having superhuman ability, that allows him to literally hear Su Kyeong’s thoughts. Scriptwriter-nim, you didn’t read Twilight did you?

And then for some reason, Dong Wook starts falling for Su Kyeong. Oh boy, scriptwriter-nim did. What, a let-down for that was so out-of-nowhere! The second let-down was the formation speed of the love-line. It was too fast and too sudden. O..kay. And I thought Love was an emotion that needed time.

Seriously, people don’t fall in love at the speed of light. If you call ‘love-at-first-sight’ another way of falling for somebody, then, that means you don’t even as much as like the person or see the person as a friend. How are we to love somebody when we don’t even know what kind of person he or she is?

When we love somebody, the emotion is so powerful, that we fully embrace the positives and negatives of the person. And as a non-believer of this soulmates thingy, Dong Wook and Su Kyeong’s relationship just seems even less believable.

I thought that Soulmate was also emphasising the importance of timing in relationships. But then if that was the case, Dong Wook’s special ability felt forced done to show that side and done to stress on the show’s focus – soulmates. Unless there was an established unrealistic quality to the show, then I would have been thoroughly fine with the sudden change of events. But there wasn’t and besides, isn’t your soulmate someone whom you meet and bond with very naturally?

Overall, Soulmate was an okay watch for me, though I would have preferred the show to continue with the direction it was taking in the first half.