Anybody who needs an after-drama comments please go to my mini-reviews/reviews page:D [10 reviews are out already!]

Sorry for the wait!

1. Brian Joo and Heather Park (Kor-Amer singer) are going to be part of a ‘ US-produced Broadway-style musical, Loving the Silent Tears, to be held on October 27 at the Shrine Auditorium in Los Angeles‘. With co-stars as big as Grammy, Tony, Emmy and Oscar winners, this could go potentially well for Brian and Heather. Congrats to the both of them!

2. Seungri, do you understand what’s once bitten twice shy? After the sex scandal, Seungri should have put in some effort to avoid bad publicity. As a celebrity, there should be some control. I don’t mind idols having a girlfriend or a boyfriend. I think they have the right to be in love and shouldn’t be dissed if they are. But for Seungri’s case, something like this could get blown bigger. And we have Tabloid magazines for that, TQVM. =.= I love YGE’s reply to this matter though. They are right. Nothing amounting to a scandal has occurred. Well, except that they haven’t yet addressed that ostentatious elephant in the room.

3. Read more about Hoya from Eunji here! I can’t really read the article since it might potentially spoil the show for me. ALL of the recent articles about Answer Me 97 are driving me nuts. Me want watch but life got busy with the school term..bleagh..The other articles worth reading for fans will be the kiss scene and news of a possible second season.

4. I know celebrities face a lot of times where they have to repress their emotions. How can a person take so much and not let some go? I can’t do it, not to mention them. Some people just do or say things that are so hurtful you want to give them a taste of their own medicine. Shinji did right in speaking out about her feelings but I thought she was being hypocritical. If she was so angry at the trio , why didn’t she say anything to them there and then? It’s the same thing isn’t it – taking out on twitter and telling them off? (She was quite specific in her tweet.) If I were one of the trio, I would be angry. What is she trying to do by telling the world what I did? Why couldn’t she be honest with me?

No doubt, Shinji has the right to say anything she wants. But with such matters where netizens and fans can take it the wrong way, she should have been more tactful. But I’m not that unreasonable. Given that she was in a difficult situation, I wouldn’t blame her if she took it to twitter. But then again, she shouldn’t have been so specific. Just going right to the point with false celebrity gossips would have been enough.

5. 2PM’s coke CF has gone interactive! Daebak, seriously. How cool is this?

6. JYJ and SME’s case is put on hold indefinitely.=.= The reason the two parties took it to court was so that the court could help settle the issue in a fair and just manner for them. Obviously it was after the two groups couldn’t compromise which led to trials after trials. I understand that this battle has used up a lot of resources but isn’t it the same for JYJ and SME? Hope the matter ends ASAP.

Amazing what these k-netizens can do with their pair of eyes. The red circle could not even help me detect the mistake (until I read the comments). LOL. It’s not like it was an obvious mistake or anything and yet the netizens could spot the error without some kind of help. Amazing, really. 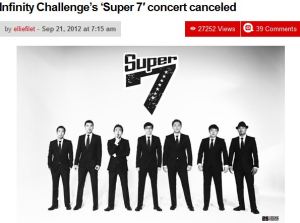 1. I mentioned this before in part 1. This, meaning Leessang’s(Gary and Gil) departure from their respective variety programmes (Running Man and Infinity Challenge). I’m sure a lot are unhappy with such news and I am too. The minority who bashed Leessang Company for the ticket prices are simply too much. (The concert price dropped to appease these people but the concert got cancelled subsequently.) It’s for CHARITY people. If I could enjoy a concert and help people at the same time, I really wouldn’t mind. Of course, I have come across situations where the concert tickets are too much for me. I just simply don’t fork out that amount of money because I’d rather have my cake and eat it too – buy the CD that costs less than the concert fee, watch the concert in my comfy chair and be able to see the idol’s face. And what’s wrong with jacking up the price to earn a little profit? Don’t these celebrities deserve some reward after a hard day’s work? =.= It’s sad that the duo have to do something as drastic as leaving their variety shows to keep mouths shut. Just promise you two will be back soon and that at least the 2 programmes still continue running!! However if loyalty wishes to show itself at such timing, it would be awesome. AKP’s op-ed was a good read:)

2. On the up side, teddy bear host Kang Ho Dong’s Star King comeback is confirmed! The date, though, isn’t. I actually don’t watch many of Kang Ho Dong varieties but from the cuts of the programmes he hosts, I think he’s a very loveable guy who knows how to create fun out of nothing. Hahaha! KHD and his dongsaengs having fun in their water park:D

3. Dasom took the chance on Strong Heart to talk about Sistar’s dorm life. Apparently the older girls prefer to live without the burden of pesky clothes. (It’s understandable with the heat in Summer. I wish I could keep cool the way the Sistar members do, sans Dasom. We feel hot too! And my country is summer all year round too. 😦 ) Boom’s thoughts though, are on the hot side. Being naughty, eh Boom? LOL.

4. The difference in pronunciation can actually be funny!Jay Park sounds a lot like the late MJ! His voice suits the kind (catchy but not the ‘loud’, attention-seeking kind) of songs MJ is known for.

This ends the news side of KNSF. Songs will be on the upcoming part 3. 🙂 Sorry for the late updates once again.

Posted by fridaymojo on September 28, 2012 in Drama (of the other kind), General updates, Kpop