And here it is!

It has been a long while since I updated you guys on the happenings of the drama/film world. I have been reading the updates on Dramabeans but none of the upcoming projects have hit me and got me interested real bad, like as though I will die from curiosity if the film/drama isn’t set to air. I mean, there were some that sounded okay but then when I think about it again, wasn’t much. More of the drama details are in the db link.

(Drama) Ad Genius Lee Tae Baek: I might try it out for Jin Goo. I have been dying to see him in a drama..because I don’t know this actor. I know. Call me strange. The plot sounds good-natured and all. Maybe I will see it, maybe I won’t. Who knows? Maybe it actually is a good show. Like how I had zero expectations for Dr. Champ. Cast: Jin Goo, Park Ha Sun, Jo Hyun Jae and Han Chae Young.

(Drama) Nine: One of those shows that confuses me but might have something in there. It’s got time-travelling and mystery going on. Just like the kind of feeling Incarnation of Money gives me. Cast: Lee Jin Wook, Jo Yoon Hee, Jeon No Min and Park Hyun Shik. 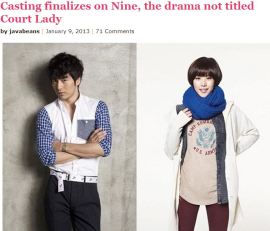 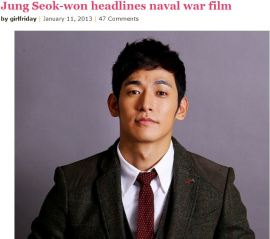 (Film) Battle of Yeonpyeong is about a real border attack from North Korea to South that happened in 2002. The film can be promising if done right. For now, the film has Jung Seok Won leading as commander Yoon Young Ha, a real military officer and a hero.