END_OF_DOCUMENT_TOKEN_TO_BE_REPLACED

How’s everyone doing? Apologies for the long wait. Hope you like what I have for the updates:)

It’s been a long time since I did the following..

1. I can’t NOT say anything about Park Shi Hoo‘s alleged rape news that has been going on for a while now. I have been standing on the neutral side after being reminded by HK series The Other Truth that the real truth can be different from the perceived truth. But as I read on, I feel more and more that the victim/ trainee A 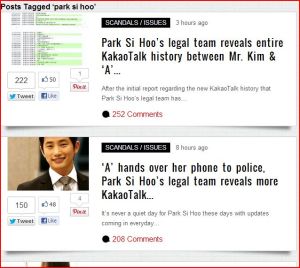 doesn’t seem to know what she’s doing and has literally dug a grave for herself, easily allowing more and more to point their fingers at her. Like what the other have commented on the posts, how can she remember that she was raped twice? All those ㅋㅋㅋs and flirting in her conversation with PSH’s junior/ hoobae make me think she doesn’t even take her rape seriously if she actually did. I doubt that a person with the state of mind after being raped, he/she could joke around, flirt and actually wonder if she is pregnant. It’s incredulous, really.

By the way, It’s not just Park Shi Hoo that is entangled with the law. Block B and Jang Woo Hyuk are in their own mess too. Hope the best for all of them! Block B especially 😛

Military news: Yoo Seung Ho has enlisted as he mentioned. I actually prefer the celebrities go into army earlier. Return with made-for-broody-showers abs!!!

END_OF_DOCUMENT_TOKEN_TO_BE_REPLACED

Posted by fridaymojo on March 8, 2013 in Drama (of the other kind), EYE CANDIES, General updates, news

Again, do take note that I have not listened to every song on the albums, minis and singles.

1. Tiny G‘s comeback with Minimanimo🙂 The title trck is a fun song with an interesting starting melody that captures attention very quickly…for me that is. youtube link. Come to play sounded a little childish for me. It’s on the akp link if you wanna listen it out for yourself.

2. Rude Paper‘s follow-up song wadamin( slang for what do you mean) is out:)An ok song. The definition of the song as on akp: The song laments the rigid blueprint for a ‘good life’ in society today aka getting into a good college, landing that great job, getting married, and providing for a family. The music video showcases these sentiments as the lone person is seen doing well meeting expectations, but feeling stifled., featuring Naomi, the female singer. I like the MV:)

END_OF_DOCUMENT_TOKEN_TO_BE_REPLACED

Posted by fridaymojo on January 28, 2013 in General updates, Kpop

Looks like infiltrating into RM to kidnap Gary is not going to work any more. The more pressing problem at hand: It’s going to be even harder smuggling Gary. Haha. I’m just kidding. As a Gelly-sshi fan, I am shocked. I still am. I can’t imagine what would happen to RM and my future watching experience. To tell the truth, Monday Couple was one of the reasons I watched the show. I love everyone but Monday Couple took a special place in my heart. I literally re-watched the front parts to see how far they have come. I squealed at their skin-ship and chuckled over their interactions. As for Gil, I don’t watch Infinity Challenge. But it’s the same. There’s a saying that ‘no one is indispensable’. But as time passed, that person becomes irreplaceable.

LOL of the day

Through an idol, I got to know an I-gadget App (SimSimi) that replies to your comments. Now this is interesting. It’s something you need when you want to seem busy lol. So what did SHINee’s Jonghyun talked about with SimSimi?

END_OF_DOCUMENT_TOKEN_TO_BE_REPLACED

Posted by fridaymojo on September 26, 2012 in EYE CANDIES, Kpop, news

Hi everyone! I will be even busier because term’s starting for me. If anyone thinks that I’m being overly informal, please do feedback to me.

Making the headlines for me

1. Food for the eyes with Kim woo bin *OMGSOHOT* 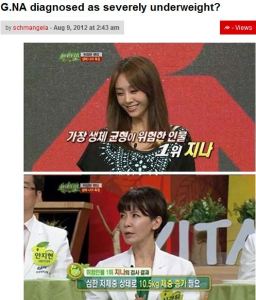 END_OF_DOCUMENT_TOKEN_TO_BE_REPLACED

Posted by fridaymojo on August 12, 2012 in General updates, Kpop, news